Whoa. It’s mid-July. It feels like the summer just started, but looking back at these pictures feels like sooooo long ago. 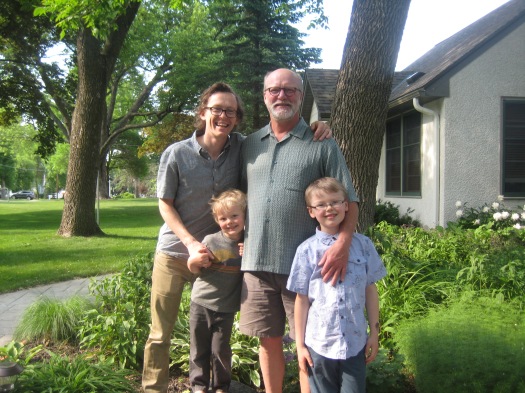 Nothing better than giant Jenga 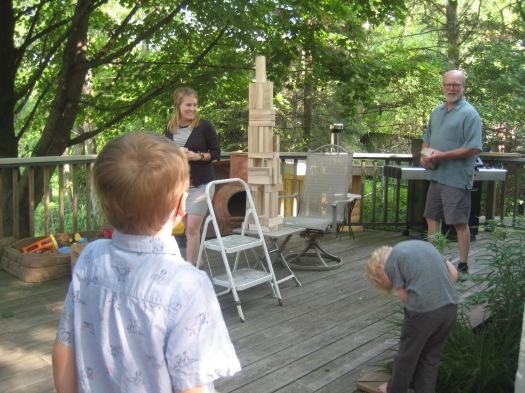 …aaaaand down it comes! I happened to catch it right as it began to tip 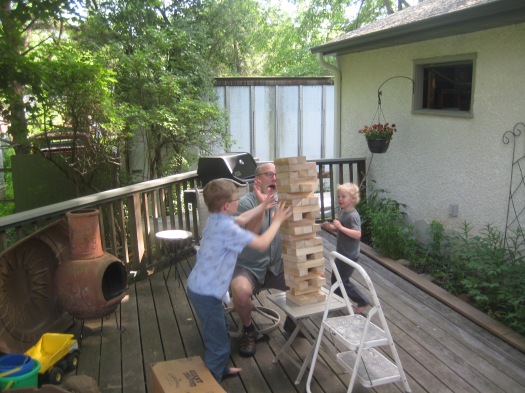 The mothers relaxing in the sun on Father’s Day

Normally we do swim lessons all throughout the summer, but this year I’m in…gulp…grad school. So we were only able to fit two weeks in. But in that two weeks, Henry was able to move from “I hate this!” to “I love this!” So that’s a win. 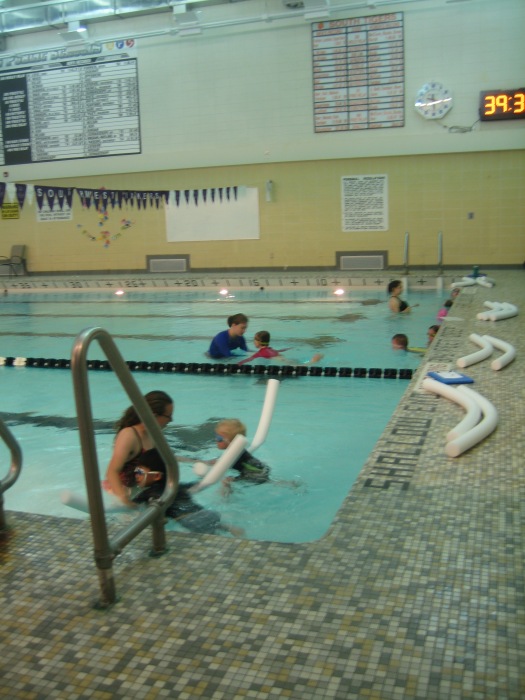 O turned 4! We brought him balloons, and he spent the rest of the afternoon in the corner with them. 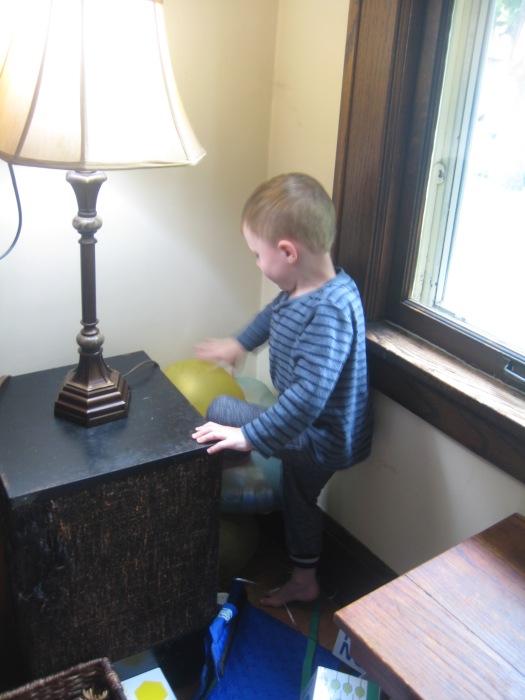 Ah. Yes. So here we come to the part of the summer that would be listed as both a highlight and a low-light. The highlight is: I got a beautiful new bike! 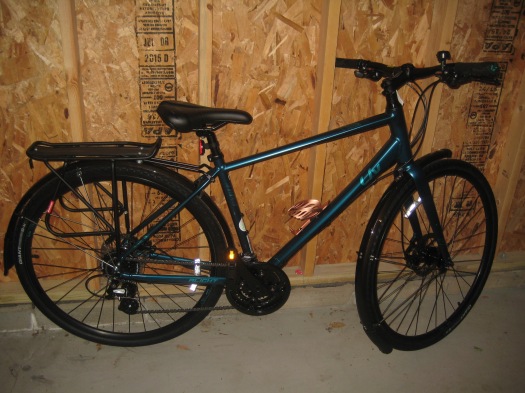 The lowlight is…it came into the bike shop the day I crashed my old bike. I haven’t been able to ride it yet, because my now-dislocated collarbone hasn’t allowed me to operate anything with wheels for two and a half weeks. So the bus and I have been hanging out a lot so I can get the boys to the YMCA and myself to campus.

I’ve had a few other mishaps lately that finally got the message through to me that trying to be both an excellent grad student and excellent at life is just not possible. So I am getting better at delegating life stuff and being okay with turning in school work that is not perfect. As long as I’ve learned from it, that’s what matters.

The Fourth of July break was SO well-timed. It gave me four days in a row to not think about school (I did my homework beforehand) and just sleep until I felt good enough to do things like play games and smile again. It was just what I needed.

It was just what the boys needed, too. They’ve been enjoying the Y, but it’s also been stressful having schedules to keep and so little down time. So the cabin brought everyone’s smiles back.

Canine time seems to do something for the soul, doesn’t it?

It was especially buggy, so we kept the fire going all day. And by “we” I mean Jim and Henry. Henry was all about tending to the fire. They even did some experimenting with color sticks to make interesting smoke. 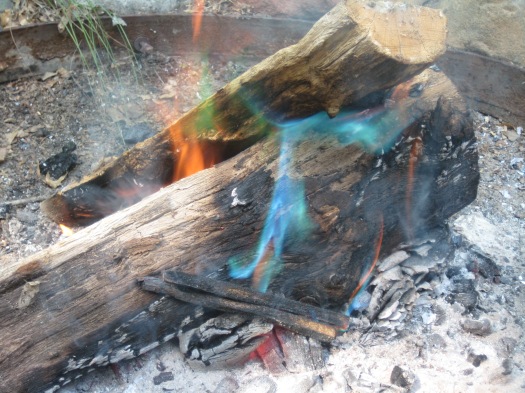 Saturday (after I’d come back to life!), we had a day of outings. Some went to an art festival, and some to mini-golf. I do love art fairs, but that day it was no contest. I needed to putt. 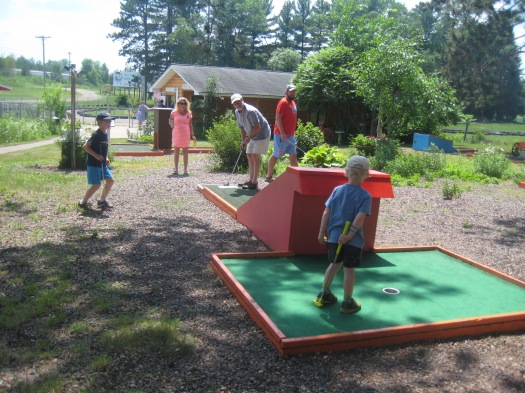 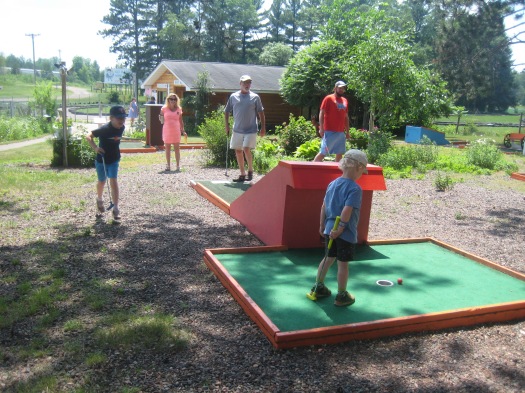 Derek struggled a little with Hole # 9 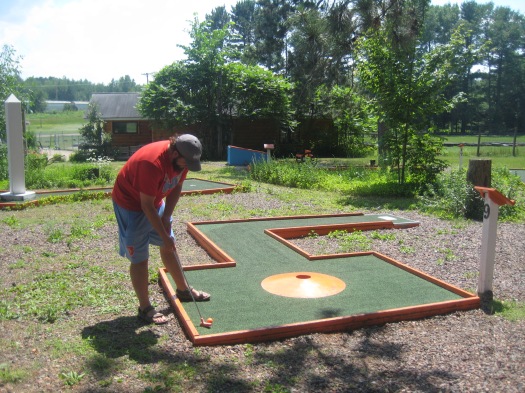 Katy was our trusty scorekeeper. She assured us at the end that it truly was a four-way tie. Mmmmhmmmm…

I couldn’t drive, but it was fun to watch the boys’ reactions.

And then, it was back to the fire. So darn relaxing.

We made it through another week after that. It’s still hard, but the break gave me the energy to do it. Today we let Lake Harriet provide some rejuvenation and sunshine for us. Charlie was all about the water.

And Henry was all about the sand. I did half-and-half, which was 100% perfect.

And to end on a sweet note. We received a box of Lucky Charms  this week, and eating it brought me right back to childhood with every bite. It made me feel quite happy (if a bit sugared-up and not full for very long afterwards). Magically delicious.