Easter crept up on me this year.

The hunt caught the boys by surprise, because it happened on Saturday. Sunday promised snow, and it did not lie.

Easter morning was a little strange.

Joe and I dressed up anyway, because it just felt like we should! He had ordered an amazing Easter dinner from a local restaurant, so we ate like kings. Then, since outside wasn’t too appealing, we put on a pot of tea and played some Trivial Pursuit!

We ‘zoomed’ with the Sikkinks, which was really great. Everyone shared a little bit about what they are up to, so we all got to see one anothers’ faces while gleaning the information we would have if we’d all been gathered together and chatting individually. Good going!

So, pirates are still a big thing for Henry, and both boys are very much into Lego-ing.

So, when Joe found this amazing Lego pirate set, we were intrigued. It re-imagines the classic Lego pirate ship from back in the day. It got shipwrecked, and has been turned into a tavern/inn for pirates on an island (you can also build the pirate ship in its original form as well).

Since we’re all home together, we thought it would be a great project for right now.
The boys freaked out!

Getting used to the instructions style of a 16+ project took some parental guidance.

But it wasn’t long before they were able to truck along themselves. We had to request that it be a whole-family project, and that we just build a little at a time. Otherwise Charlie would have had the 2,500 pieces put together that very day!

It ended up being perfect, because each stopping point on its own provided days of play and examination.

Charlie has been doing a lot of FaceTime calls with a friend, and they have morphed into them creating Lego sets for the other person to see on their screen. Then they tell stories about the characters. It’s delightful! This was only their second, so it’s still pretty minimal. 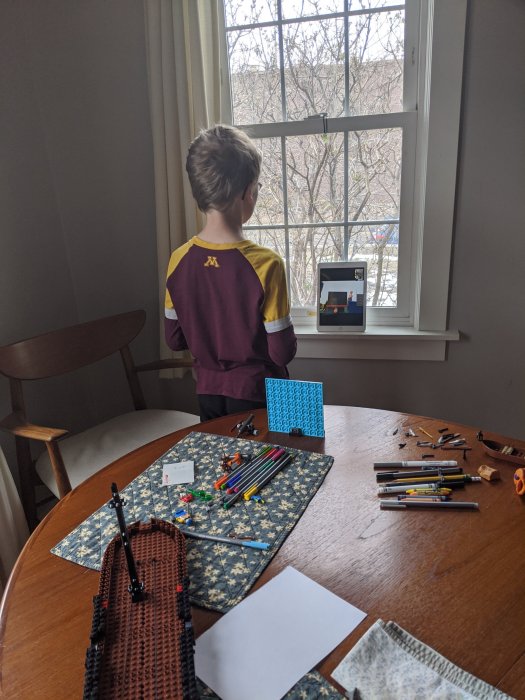 Oh, the sillies! Staying in a house all together gets us all a little goofy, and it feels great to be able to just be your most honest self. This was jammy time, and Henry decided both of his legs should go in one pant leg. It led to some nice hopping! 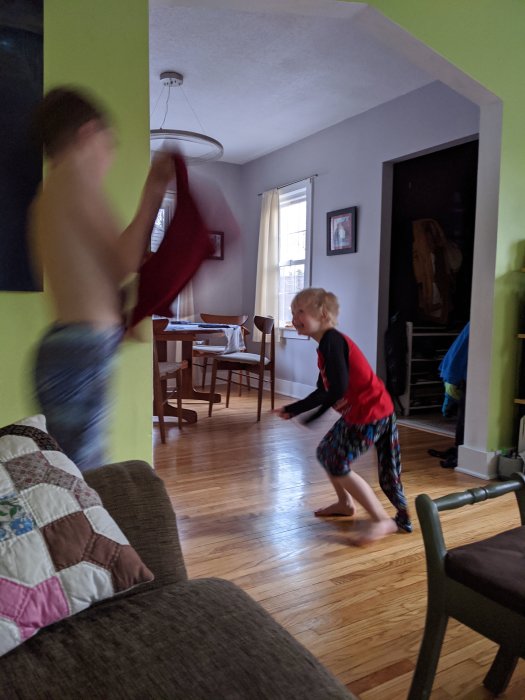 Even school can be fun when you do it right. Here’s Hennie’s ‘Sight Word Wall.’ He loves getting to stick them up with push-pins. A lot of the words are ones he’s decided he wanted to add, not just ones his teacher sends. And for the record, ‘go’ and ‘on’ are supposed to be separate. He just wrote them on the same slip. ‘Goon’ is not a word we are working on recognizing. Although it’s definitely the first thing I see every time I look at the board! 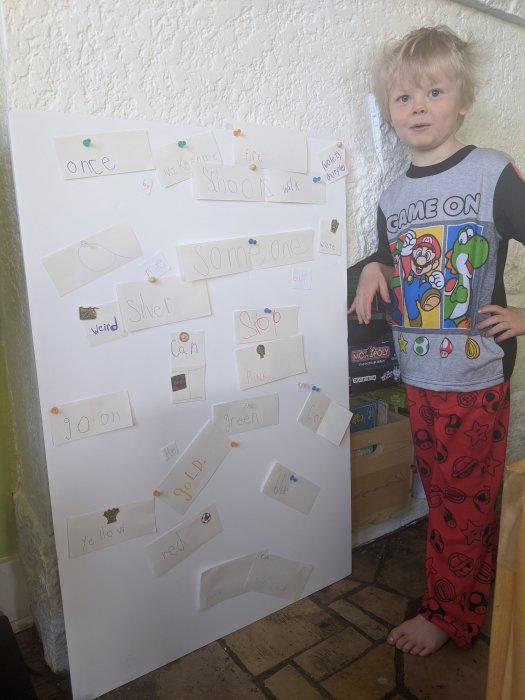 Bananagrams tiles are good for word practice as well! He doesn’t even realize he’s doing school. I like Charlie’s acrostic there at the top. He’d just read a book about the scientists who discovered each element. That’s where Lise Meitner and Glenn T. Seaborg come from!

I was feeling cooped up, missing local businesses and needing to make something. So, when Mo Willems, in one of his Lunchtime Doodle videos showed us a little village he made out of boxes to create the illustrations for one of his books, I dove in!

Here we all are at a local candy store and our favorite coffee shop. It felt good to see some version of us getting to go out, even if just in finger puppet form. 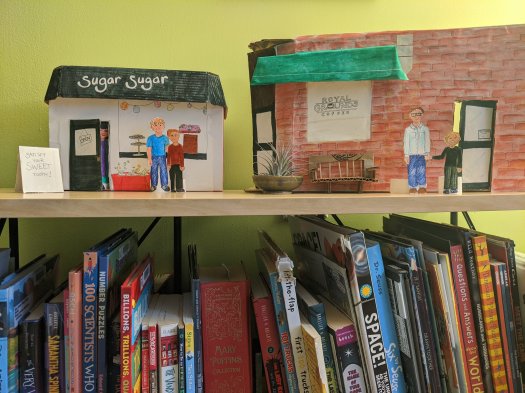